Advantages and disadvantages of computer multitasking

“Doing multiple tasks at a time in a computer is called computer multitasking (CMT)”.

Multitasking is evolved from multiprogramming and has an old history. In the 1960’s computers were slow. Old computers cannot perform two tasks at a time. To perform one task we had to terminate other task running.

In modern operating systems (OS), we can do multiple tasks without terminating another task.

Every program or task goes to main memory for processing. Each program gets an address in memory. Registers are also assigned to each process for storing information. One process cannot read or change address and registers of another process. 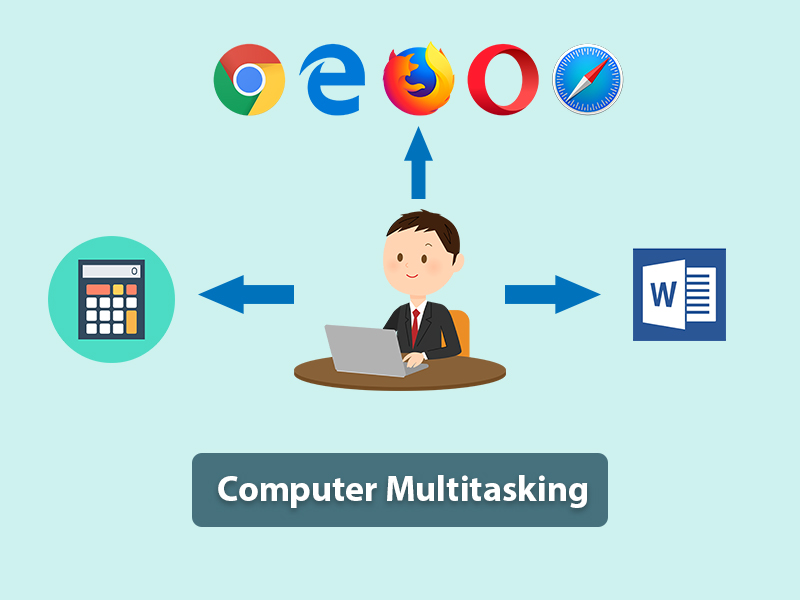 In multitasking, CPU time is shared between programs. Suppose there are three programs running on a computer. We name these programs as MS Word, browser, and calculator. Processor gives time to all three programs as long as they are running. At one time the processor executes one task and then switch to another task. The switching between tasks is so fast that the user cannot feel any issue in using programs.

Two types of multitasking are used.

In cooperative multitasking, one program controls multiples processes in the main memory.

In preemptive multitasking, each program is given fixed time in main memory. Control is given back from the program when that program gets busy in I/O operation.

Better use of computer resources:

In CMT, memory, hard drive, and virtual memory are better managed. Processor time is also well used as the wait time is less.

A computer user can save his time:

Suppose any user is downloading any file from the internet. Now he can do other tasks on the computer without waiting for the file to download completely.

One process cannot change data of another process in main memory. Each process can only use his own space allocated.

If any program generates errors then other programs running on the computer are not affected by it. For example, if Google chrome crashes then your data in MS Word is not affected.

CMT can handle multiple users at a time. Every user can run his own programs independent of other users.

Used in iPhone and iPad:

Multiple apps can run on smartphones and they use multitasking techniques.

Computer with the high specification is needed:

For a computer running heavy games and software, CPU heat up quickly so the special cooling system is needed for CPU.

-2
4 shares, -2 points
I am a blogger and freelance web developer by profession. I love to blog and learn new things about programming and IT World.